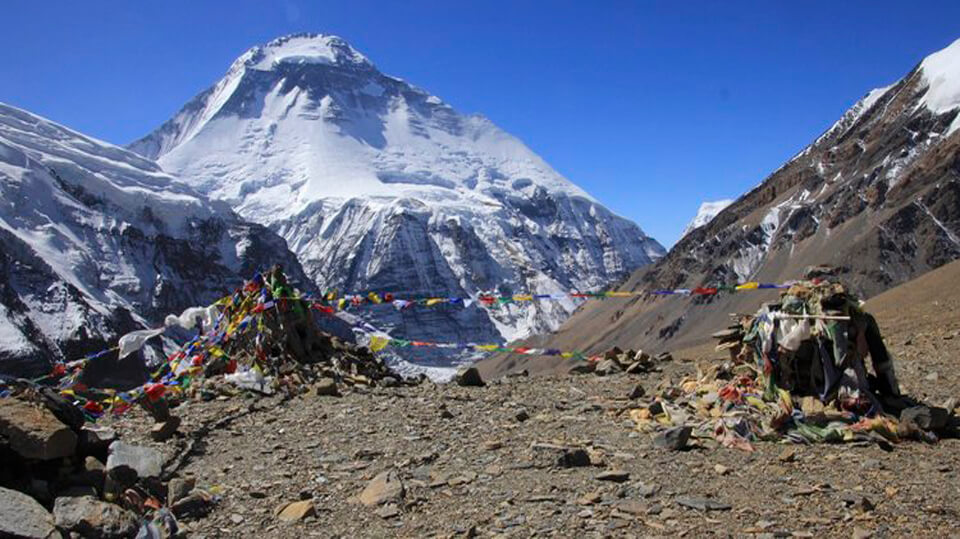 Dhaulagiri Sanctuary Trek is an off the beaten path trekking in Nepal. Officially launched from October 2015, it takes you to the South Base Camp of Mt. Dhaulagiri (8,167 m). It is the 7th highest peak in the world located west of Mt. Annapurna (8,091 m).

Mount Dhaulagiri was first successfully climbed by an Austrian Mountaineer Kurt Diemberger on 13 May 1960. He was a member of a joint expedition team of Swiss, Austrian and Nepali climbers led by Max Eiselin.

As it is a newly introduced trekking destination of Nepal, teahouses are not fully developed en route. Dhaulagiri Sanctuary trek is a combination of homestay and camping trekking in Nepal. On the first few days, you will get the organic food served in the best hospitality in the Magar ethnic villages.

While walking along the less crowded trekking trails, you will get to see a variety of animals and birds in the forests of pine, oak and rhododendron. This moderate Nepal trek takes you along the scenic the Rāhu Khola and the Myagdi Khola valleys.

The attractions of Dhaulagiri Sanctuary trek are the cultivated farmlands and high altitude villages surrounded by green forests. The traditional houses made up of stones and locally available materials are also worthy of visiting.

Dhaulagiri Sanctuary trek itinerary ranges around 14 days. Out of which you spend around 8 days in Dhaulagiri region and 6 days out of it. During this duration, you will witness the mesmerizing view of the snow capped peaks of Annapurna and Dhualagiri Himalayan Ranges.

The ethnic villages of mixed communities like Chhetri, Brahmin, Gurung, Thakali and Magar. The Magar people are the dominant ethnic community of this region. Most of the male members of this community have been recruited in the British and Indian Army since before the First World War.

Dhaulagiri Sanctuary trek is primarily a camping trek except some homestay sites en route. As you need to carry the camping equipment and food stuffs, you need to hire a crew. The crew consists of a team leader, a cook, a kitchen helper, a guide and a few porters.

Dhaulagiri Sanctuary trek cost happens to be comparatively higher than a teahouse trekking in Nepal. Actually, the cost of any Nepal tour and trekking packages depends upon a few factors. The factors are Nepal trekking duration, the size of crew, trek permits as well as food and accommodation services you use.

The homestay sites of the ethnic villages provide you basic facilities of food and accommodation. The cost of food and lodging is not as much high as in those teahouses and lodges.

Dhaulagiri Sanctuary trek is a moderate type of trek to Dhaulagiri South Base Camp (4,055 m). You have to walk for about 6/7 hours along the rugged trails going up and down.

There is not any high pass on the trail to the south base camp of Mt. Dhaulagiri (8,167 m). The highest altitude you have to reach is Dhaulagiri South Base Camp (4,055 m).

You have to walk and spend the nights above 2,500 m only two days of the total itinerary. Before trekking to Dhaulagiri South Base Camp, you have to stay a night in Odar Camp (3,189 m). Next morning, you trek to the base camp and spend another night there.

Due to the low altitude, there is not much threat of Acute Mountain Sickness (AMS). When there is not any risk of AMS, you can do this trek easily.

The services of food and accommodation are the only factor responsible for Dhaulagiri Sanctuary trek difficulty. You can’t choose a large variety of food items from the menu. However, you can load the food items of your choice and get the crew to carry them.

Dhaulagiri trek map begins from Beni, the gateway to Guerrilla trek and Upper Dolpo trek. Then, it moves along Jhi, Gyashikharka, Phedi Camp and Odar Camp to Dhaulagiri South Base Camp. After getting the lifelong memories of Dhaulagiri Sanctuary trek, you climb down to Chhari. Thereafter, you spend a night at Dagnam and drive back to Pokhara via Beni.

The NTR representative receives you at the Kathmandu Airport and transfers to the hotel. After you become fresh, you can visit Thamel Bazar on your own.

After breakfast, you begin the trip towards the Lake City Pokhara in a private jeep or local bus. The journey continues along the Prithvi Highway. Enjoy the amazing landscapes, small trade centers and the mountains of Ganesh Himal, Manaslu and Annapurna regions.

You reach Pokhara around 12 noon and then will be relocated to the hotel. After becoming fresh, you will go around the most beautiful sites of this tourist hub. Boating on the Phewa Lake, visiting the Devi’s Fall, etc. are some of the must-do activities.

By crossing Beni, you will directly drive to Kushma, Parbat. Kushma is a growing tourist destination of Nepal as there is the world’s second highest bungee jump. This suspension bridge over the Kali Gandaki River is Nepal’s highest of this type.

After enjoying the stunning view of Annapurna Massif and Dhaulagiri Massif, you drive back to Beni. You know Beni is the gateway to Guerrilla trek and Upper Dolpo trek. You can find comfortable hotels, restaurants and lodges here.

You begin the today’s journey by driving along the off-road for two hours. Then, you start walking along the windy trails up to Jhi Village. Although short walk, you will enjoy the green hills, lush valleys and the Himalayas.

Witnessing the views of the Himalayas and wonderful landscapes, you march up ahead towards higher elevation. Although you have to walk for about 7 hours along the rugged trails uphill, you will enjoy it. The scenery around the trail makes you move at a considerably faster. Finally, you end up today’s trek at Ghyasikharka.

Today’s trekking is a little adventurous as you will be following the steep uphill trails. Enjoying the spectacular view of the snowcapped peaks and green hills, you walk along the windy trails. At the end of the day, you reach Phedi Camp to take the rest.

Witnessing the stunning view of the surrounding, you move further from Phedi Camp to Odar Camp. “Odar” is a Nepali word meaning “Cave.” Yes, it is hard to cover the specified distance in the steep rugged trails. However, you love completing today’s trip as soon as you can as the scenery is amazingly beautiful.

Dhaulagiri Sanctuary trek today takes you closer to Dhaulagiri South Base Camp (4,055m). Although the trip is challenging, the fact that you are reaching the base camp of one of the eight-thousanders keeps boosting you up! Relishing the appealing view of the snowy peaks and green environment, you reach Dhaulagiri Base Camp.

By witnessing the sunrise view of the Mountain Giants from Dhaulagiri Base Camp, you begin retreat journey. By following the comparatively easy trail, you walk along Dhaulagiri Sanctuary. You will see some animals and birds playing hide and seek with you. And, you stop today’s trek in Chhari.

By witnessing the snowcapped peaks of Dhaulagiri Massif and Annapurna Massif, you climb down. The journey becomes more memorable due to the biodiversity of Dhaulagiri Sanctuary. Finally, you reach Dagnam, a beautiful village of Dhaulagiri region. Visit the village to know more about lifestyle, culture and tradition by talking with the local people.

By driving along the off-road up to Beni and then blacktopped road, you will arrive in Pokhara. In Pokhara, you can explore the remaining beautiful places. You can celebrate the successful completion of Dhaulagiri Sanctuary trek. The nightlife of Lakeside is something we recommend you to experience.

You become ready to return Kathmandu from Pokhara. You can drive along the Prithvi Highway for nearly 6 hours. Or you can fly to Kathmandu in just 25 minutes. After you arrive in Kathmandu, you will be shifted to the hotel.

Today is a spare day in Kathmandu Valley. So, the tour guide will take you for Kathmandu Valley tour. He takes you around the UNESCO World Heritage Sites of the valley. You will be visiting the Monkey Temple, Patan Durbar Square, Pashupatinath Temple and Bouddhanath among 7 of such sites.

In the evening, our agency invites you to farewell dinner at a cultural restaurant around Thamel. Enjoy the cultural shows and the typical Nepali food items.

The NTR representative takes you to the Kathmandu Airport as per the flight schedule.

What are Dhaulagiri Sanctuary Trek permits?

To make Dhaulagiri Sanctuary trek, you only need TIMS Card. For a Free Individual Trekker (FIT), you have to pay USD 20 and for an organized trek, it costs USD 10 per person. You can get it from Nepal Tourism Board Offices in Kathmandu and Pokhara.

Can I do Dhaulagiri Sanctuary Trek?

Yes, of course! It is a moderately difficult trekking that you need to reach the maximum altitude of 4,750m. You have to walk for about 6/7 hours per day along the rugged trails in the mountains. To book via a well-experienced local tour operator, click www.nepaltrekkingroutes.com.

Where is Dhaulagiri Sanctuary Trek?

Dhaulagiri Sanctuary trek lies on the lap of Annapurna Massif and Dhaulagiri Massif. It is one of the short and easy treks from the Lake City Pokhara, which takes you to the South Base Camp of Mt. Dhaulagiri (8,167m), the world’s 7th highest peak. It starts from Beni, which is the gateway to Guerrilla trek and Upper Dolpo trek.

What type of trek is Dhaulagiri Sanctuary Trek?

It is a camping + homestay trekking because there are not teahouses developed on the stops. It was explored and made available only from October 2015. Homestays are run by the Magar ethnic people who are simpleminded and good at providing hospitality to their guests.

Which is the best season for Dhaulagiri Sanctuary trek?

The best season for Dhaulagiri Sanctuary trek is spring (March – May) and Autumn (September – November). As the days are fine with the clear skies, you can have the jaw-dropping scenery of the Himalayas and amazing landscapes.