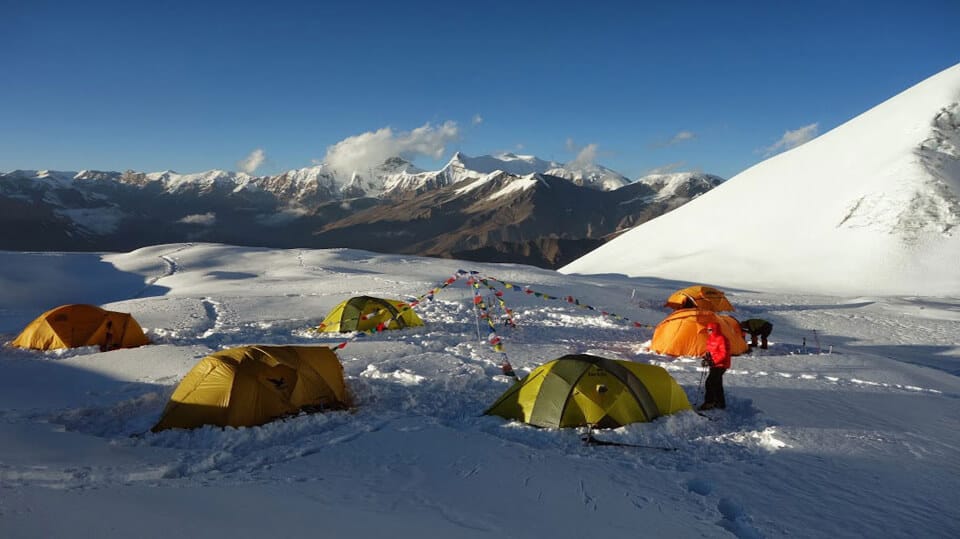 Himlung Himal Expedition is one of the most fascinating experience you can ever get in mountaineering. It is far more challenging than Nepal trekking and peak climbing in Nepal. Initially known as Nemjung, Himlung Himal (7,140 m) is located in the Manang district amidst the other mightier Himalayas.

Himlung Himal is around 150 kilometers Northwest from Kathmandu while just 25 kilometers Northwest from Mount Manaslu (8,163 m). Despite many other attempts made earlier, the first Himlung Himal expedition was successfully made on October 27, 1983. It was the joint expedition team of Nepal and the Hirosaki University Alpine Club led by Junji Kurotaki.

Besides, the Himalayas, this trip rewards you with the opportunity to witness the flora and  fauna of Annapurna Conservation Area Project (ACAP). The quaint lifestyle, culture and tradition of Nar Phu Valley are the major cultural attractions of this region.

From the top of 7,140 m, you will see the Himalayas and Tibetan Plateaus surrounding the massive snowline. Manaslu (8,163 m), Annapurna Massif, Annapurna South, Gangapurna and Mt. Machhapuchhre (6,993 m) are seen above the clouds from Himlung Summit.

Himlung Himal expedition itinerary ranges from 23 days to 35 days. The itinerary is always a subject that can be customized according to the situation. Nepal Trekking Routes has made this voyage for 27 days. As Annapurna Circuit trek is also possible after doing this, the proposed itinerary can further be revised.

To reach Himlung Himal Base Camp (4,830 m), you follow the trails of Annapurna Circuit Trek in the beginning. Diverting towards Nar Phu Valley trek route, you cross Nar and Phu Valley. After spending a night at the classic Nar Village, you trek to base camp along the rugged trail.

For the acclimatization purpose, you spend 14 days (that can also be extended) at the base camp. During this time, you get trained to use the mountaineering tools and other techniques. Time and again, you climb up to Camp 1 (5,400 m) and return to the base camp.

Likewise, next time you ascend to Camp 2 (6,000 m) to test whether you are ready to make this feat! Doing this ascent and descent to and from Base Camp to Camp 1 and 2, you finally reach the summit of this 7,000 m+ peak.

When you reach the top, you trek down to the base camp and then traverse up to Meta Village. If you want to make this journey short, you can drive back to Kathmandu right from Koto. Or else, you will trek to Dharapani and Chamje adding two more days. From Chamje,  you return Kathmandu from Chamje via Besisahar.

While making a plan, you definitely want to know Himlung Himal Expedition difficulty level. It is obvious that the expedition is far more different from that of trekking or peak climbing in Nepal. Moreover, Himlung Himal is above 7,000 m that requires certain extra preparedness for this expedition.

You need to have good enough preparation and strong mental readiness for reaching the peak of Himlung Himal. Besides, it demands a good deal of training from an authorized agency and by a professional mountaineer.

Yes, it is not as difficult as Everest expedition or Annapurna expedition. But also, you must prepare yourself physically and mentally as if you were going to reach the summit of the 8,000 m+ peaks. In other words, you must plan something bigger to achieve a big feat in the Himalayas!

If you have the previous experience of peak climbing or trekking in Nepal across the high Himalayan passes, you can benefit from it. Nevertheless, if you are physically fit and mentally committed, you can do it!

The Sherpa guide of  Nepal Trekking Routes will train you sincerely by giving you all the tricks to win over this challenge. As the time you spend at the base camp of Himlung Himal (7,140 m), it can be properly utilized.

You must be flexible to extend the mission unless you feel confident enough to make this expedition. Because, I think lifelong experience of mountaineering in Nepal is the most valuable thing for you, right!

Spring and autumn has been known as the peak season for all types of adventure tourism in Nepal. It means, these seasons are the best time Himlung Himal expedition and other peak climbing in Nepal.

The months March and April are comparatively safer time for any expedition to carry on. It is so because the weather is fine and the temperature is relatively stable. There is no risk of avalanches.

The months of October and November are also appropriate for making this voyage. Due to the favorable weather, the temperature remains constant ensuring safety. Even in the natural calamities prone zones, there is low or no chance for avalanches and blizzards.

Himlung Himal expedition in summer is a bit trickier. The rainfall may disturb the trails which are often wet. In winter, the higher altitude remains frozen that it is almost impossible to make any mountaineering or expedition schedule.

While in Kathmandu, you find a large variety of food items chosen from a menu. You begin the trekking in Nepal after driving to Koto from Kathmandu along the black topped and off-road. Until you spend the night at Nar Village, you will get food services according to the availability in teahouses or lodges.

Generally, the typical Nepali cuisine, dal bhat is found almost everywhere. However, in addition, some continental, Chinese and fast food items will be also find. Pizza, burger and other food items are also available in these lodges.

As soon as you leave Nar Village, you will spend the nights at a campsite. Here, you won’t have much choice. You must eat the food stuffs cooked by your crew members or yourself. You know expedition is not all about getting all the luxury of urban areas!

The food and accommodation services after you leave for Camp 1 and Camp 2 are more compromising. You will have a portable stove on which you cook as per the situation. You also know that it is hard to carry a heavy load of foodstuffs while climbing along the massive icy mountains!

The representative of NTR receives you at the Kathmandu Airport. Then, they will transfer to the hotel.

The tour guide takes you around 4 of the 7 World Heritage Sites of the Kathmandu Valley. The Monkey Temple, Patan Durbar  Square, Pashupatinath Temple and Bouddhanath Stupa. The art and architecture of these cultural sites are worthy of visiting.

In the evening, the team leader shares the required information about Himlung Himal expedition.

After having breakfast, you begin drive towards Annapurna Circuit trek in a private jeep. Driving along the Prithvi Highway until Dumre, nearby Bandipur, you will take a right turn towards Besisahar.

From there, by following the bumpy and dusty road, the jeep moves ahead towards Koto. On the way, you come to see some gorges and natural waterfalls. You will go past some stopovers like Bhulbhule, Jagat and Dharapani respectively.

Following the Nar Phu Valley trek route, you move ahead through the dense forests and travellers’’ rest inn (Chautari/Pati/Pauwa). Walking further across a wide waterfall, you climb towards Meta.

Meta lies in a quite larger plains that offers you wonderful scenery of the hills and snowy peaks all around. Although the teahouses are basic, they provide really hygienic and delicious food.

In the beginning of the trek today, the amazingly beautiful chortens of Nar and Phu Valley come into the sight. You move further across Nar Phedi Monastery, where the trekkers stop during retreat journey from Nar Phu Valley trek.

Finally, walking across a steep trail, you will reach Phu Village. While entering in to this classic village, you will see the old fortresses around Nar Phu Valley. After the campsite is ready, visit Tashi Lhakhang Gompa and meet the Lama Karma Sonam Rinpoche.

After taking warm and delicious breakfast at Phu Village, you begin to ascend along the rugged trail. Enjoying the view of the silvery peaks of Manaslu region, you reach Himlung Himal Base Camp in about 5 hours.

Set up the campsite and your training and acclimatization begins right here. The team leader and the crewmembers give you the most effective techniques for expedition in Nepal.

From day 7 to day 20, you will spend the time by practising for the successful ascent to the peak of Himlung Himal (7,140m). Repeatedly, you will be climbing up and down from Base Camp up to Camp 2. The estimated 14 days time may be extended as per your physical and mental preparedness.

From the top of 7,140m, you will see the Himalayas and Tibetan Plateaus surrounding the massive snowline. Manaslu (8,163m), Annapurna Massif, Annapurna South, Gangapurna and Mt. Machhapuchhre are seen above the clouds from Himlung Summit. After making your Himlung Himal expedition successful, you climb down to the base camp.

With the sense of victory, you will start the retreat trek to Meta by leaving the classic Nar Phu Valley far behind. It’s here, you begin the celebration of mountaineering in Nepal!

Walking along the same trail you followed some 3 weeks ago, you trek to Koto. Right from Koto, you can take a private jeep or a local bus to Kathamndu via Besisahar. However, if you want to trek a few more days, you will trek until Besisahar. It depends upon agreement you have made with the agency.

Traversing along Annapurna Circuit trek route, you cross Thanchok, Timang and Bagarchhap. While walking downhill, the stunning view of Lamjung Himal (6,987m) will accompany you. Finally, you arrive at Dharapani, a beautiful village where Manalsu Circuit trek joins into Annapurna trek.

Today’s trip starts after having breakfast along the downhill trail. You cross the Marsyangdi River through a suspension bridge. Then, the trail takes you across Tal and Sattale Villages. At the end of the trek, you stop at Chamje. Here also, you can make the celebration of expedition in Nepal with your colleagues.

By leaving the terraced farmlands and wonderful landscapes, you move back towards Kathmandu. You enjoy the beautiful scenery of the nature and cultural influence while driving ahead.

After arriving in Kathmandu, the representative transfers you to the hotel. In the leisure time, go shopping around Thamel. Take rest or celebrate; the choice is yours!

Today is the leisure day in Kathmandu. Explore some cultural heritages and local markets. Buy some handicraft products like relics and garment items to present to your people back in the home country. In the evening, we invite you for farewell dinner at a cultural restaurant around Thamel.

According to your flight schedule, the crewmember transports you to the hotel. Have a wonderful time ahead! Hope to see you next year for next feat!

What is the minimum size of an expedition team?

There must be at least two persons in an expedition team. Larger the size, more interesting the expedition. If there are more members in the team, it encourages us to do the impossible as well. As you know, there’s always power in unity!

Can I do Annapurna Circuit trek after Himlung Himal expedition?

Sure, sure, you can! This expedition is made by following Annapurna Circuit trek route and  then, Nar Phu Valley trek route. From Dharapani, you can follow the traditional route of Thorung La Pass trek or Jomsom Muktinath Trek as well.

Can a beginner trekker do Himlung Himal expedition?

Actually, it is quite challenging to reach the top of a peak higher than 7,000m. it needs a good deal of training, physical stamina and mental preparedness to do this voyage. It is good for those having previous climbing and mountaineering experience. However, if you are ready to take the necessary trainings, Nepal Trekking Routes can assist you for this lifetime experience.