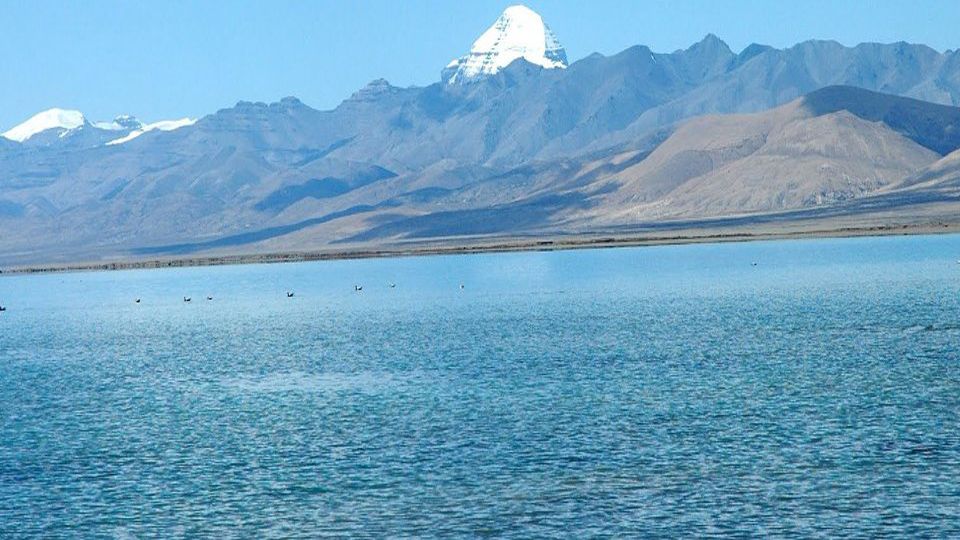 Kailash Tour via Simikot is a perfect combination of trek and overland tour. It takes you to the sacred mountain and holy lake located in the Tibetan Plateau. This trek is started from the western Nepal and end in the east of Kathmandu Valley. Mount Kailash (6,638 m) is the holiest mountain in the world for the Hindus. Visiting Mt. Kailash is the most significant promise they keep in their lives. It is because Mount Kailash is the abode of Lord Shiva.

Lake Mansarovar (4,950 m) is one of the highest placed alpine freshwater lakes in the world. This turquoise watered lake is located nearly 32 km away from Mt. Kailash. This is a holy lake equally revered by four different major religious groups in the world. The Hindus, Buddhists, Bons and Jains equally admire this lake. They have their own kind of myths associated with its origin and significance. Existence of this lake has made Tibetan Plateau more popular tourist destination in the world.

Mount Kailash Tour via Simikot is a lifetime opportunity that lets you have the multiple experiences. It is trek in Nepal, overland tour and pilgrimage tour to the holy site. The enchanting view of the Himalayas of Nepal and Tibetan Plateau is the most precious reward. You can visit the ancient hidden kingdoms of the Tibetan Plateau. The Khyunglung Kingdom and the Guge Kingdom are such valleys. If they are probed into thoroughly, a new twist to human history can be found.

The Mount Kailash Kora (Circumambulation) is the most important beauty of Mount Kailash Mansarovar Trek via Simikot. You need to trek along the 52-km-long route around Mt. Kailash. The kora route is located all above 5,000 m.

It takes two and a half days to complete this kora route. As it is above 5,000 m, this Kailash Mansarovar tour or trek in winter is not possible. You have to go across Dolmo La Pass (5,639 m) on the second day of the kora.

Whatever the religious belief, you should always be careful about doing this encircling. There are so many cases that the pilgrims have died while doing this religious rite. Acute Mountain Sickness (AMS) is the most responsible factor for this.

As the kora route is situated above 5,000 m, there is a high chance for altitude sickness. In addition, the pilgrims also believe that if they can complete it while in fast taking, it yearns them more blessings!

We respect your religious belief by all means! But, we highly recommend you not to neglect in such life-threatening issues. Your safety is our first priority after all. Consult with your team leader to successfully do this trek come tour.

You can also make overland tour to Mount Kailash tour via Simikot from Nepal side. For Kailash Mansarovar Yatra, you should follow the route via Syabrubesi-Kerun-Saga. Alternatively, you can fly to Lhasa from Kathmandu or directly from your home country.

Lhasa Kailash Mansarovar tour is also popular among the trekkers. In this tour package, you also visit the socio-cultural aspects of Tibet. You know Tibet is popular for the ancient monasteries. Besides, the Dalai Lama palaces are also other important landmarks of the Roof of the World.

Potala Palace is a UNESCO World Heritage Site of Tibet. It used to be the winter palace of the Dalai Lamas between 1649 and 1959. Norbulingka Palace is the summer palace of the contemporary time. The art and architecture of these sites are worthy of visiting.

You can reach to the north base camp of Mount Everest (8,848 m) from the Tibetan side. Lhasa EBC tour and Kailash Everest Base Camp tour are the most popular trips. Thousands of tourists from all over the world come to visit Mount Kailash via simikot  and Mansarovar Lake every year.

Mode of Transportation for Mount Kailash via Simikot

Mount Kailash Tour via Simikot comprises Nepal tour and Nepal trekking at the same time. Some sections of the journey is covered by walking on foot and others by means of transportation.

After visiting the UNESCO World Heritage Sites of the Kathmandu Valley, you fly to Nepalgunj. Then, after flying to Simikot, you begin to walk up to Hilsa. Next, you catch a private jeep to move further towards Tibetan Autonomous Region.

When you explore the ancient abandoned kingdoms, you drive to Darchen. You trek to complete the holy Kora for two and half days. You will be walking the 52-km long kora route situated above 5,000 m.

After completing the kora, you drive to Saga along the dangerous road of the Tibetan Plateau. By crossing Kerung, you spend a night at Syabrubesi, the gateway to Langtang Valley trek. Finally, you drive along the  Pasang Lhamu Highway to arrive in Kathmandu.

On the arrival day, reception at the Kathmandu Airport and transfer to the hotel.

Scenic flight to Nepalgunj in the morning and hotel transfer. Exploring the socio-cultural sites of the marketplace of Terai region. Bageshwori Temple is a must-visit place

Scenic flight to Simikot, the administrative headquarters of Humla district. Enjoy the Himalayas of the far western Nepal and Tibetan Plateau. Trek through the rugged trails up and down along the dense forests. Then, along the banks of the Karnali River, which is the longest river of Nepal. Set up tented camp at Dharapuri.

Trek along the peach and pine forests enjoying the amazing vistas of Mt. APi, Mt. Saipal and a lush valley. Leaving the trail to Limi Valley trek, ascend towards Yalbang Monastery.

Enjoy the enchanting view; talk to the monks and even participate in the daily rites in the evening if allowed.

Follow the cliffy trails above the Karnali River and pass through scenic ethnic villages like Anger and Muchu. Muchu is one of the largest human settlement areas of this region. Side trip to an old monastery for acclimatization.

Cross a suspension bridge and follow the windy trail enjoying the enthralling sight of the barren landscapes and Mt. Saipal. Cross the most picturesque village Yari to reach Thado Dhunga.

Begin the trek as early as you can to avoid the strong wind at Nara La Pass from where you can see the captivating view of Tibetan Plateau. From Hilsa, move further by sharing a private jeep with other trekkers. Mind not to carry anything like book, journal, pamphlet, etc. against the Chinese Government

After taking bath at a hot spring and enough rest, go to visit the Cave Monastery. It is the very shrine used to Padmashambhava for meditation. Take circumambulation of the Buddhist Cemetery Hill for three times as well. Overnight at Tirthapuri tented camp.

Visit the Guru Dem Cave and a newly constructed Bon monastery on the way. Within 45 minutes of the journey, you enter the wild valley of Khyunglung Kingdom.

After the tented camp set up and taking enough rest, move to explore the ancient kingdom of the Bonpos. It is hidden on the foot of the Mountains across the Sutlej River. You see the ruins of ancient palaces and hundreds of caves there.

Drive past Chomo La Pass to reach Tholing. After lunch, roam around the hidden kingdom of Guge (Tsaparang) people. You see the ruins of the ancient landmarks and the massive destruction of the war.

Visit the White and Red Monasteries of Tholing renovated after the end of the territorial wars. Overnight stay at a Tibetan guesthouse here.

Drive back to Darchen, a town located at the bottom of Mt. Kailash. Take day trip to Gangda and Sirliung Gompa by taking necessary permits. Also visit Tibetan Medicine Center and Darchen town for acclimatization purpose.

As it is the first day of Mount Kailash Kora (Circumambulation), your trekking begins up to Tarpoche teahouses. By loading the camping stuffs on a truck or yaks, march ahead towards Diraphuk. Enjoy the breathtaking view of the north face of Holy Mount Kailash from the camp site.

The second day of the Holy Kora is the most difficult and interesting day as well. You trek through Dolmo La Pass, the highest pass in the world. Dedicated to the female deity, this pass is decorated with the colourful prayer flags.

To avoid the blizzard or unfavourable circumstances, you must cross the pass even before the dawn.  When at Zuthuphuk, visit some cave monasteries as well.

The last day of the Kora, exit towards the Barka Plain Valley via Darchen. Then, drive towards Lake Mansarovar in a private jeep or by sharing with other travellers.

In about 40 minutes, you get to the holy lake of Hindus, Buddhists, Bons and Jains equivalently. This is the holiest pilgrimage site in the world for the Hindus that they reach once in a lifetime!

Also, don’t forget to visit the Chiu Monastery (also called “Bird Monastery”) nearby Mansarovar Lake. The view of the holy lake from this foothill gompa is beyond description!

Today’s drive is quite long between Mansarovar to Saga. The road passes through HorQui and across the Mayum La Pass (5,225m). Relish the alluring view of small towns like Zhongba and Paryang.

The Chinese tour and trekking guides escort you up to Kerung, the border between Nepal and Tibetan Autonomous Region. By completing the immigration process, you drive further to Syabrubesi, the  gateway to Langtang Valley trek or Ganesh Himal trek.

Roadway journey to Kathmandu via the Pasang Lhamu Highway. The amazing vistas of the snowcapped peaks of Langtang region, Ganesh Himal and Manaslu region.

Relocation to the hotel after arriving in Kathmandu. Relaxation or party for the successful completion of Kailash trek via Hilsa Simikot. Alternatively, go for shopping garments or relics.

In the evening, farewell dinner at a cultural restaurant enjoying the cultural performaces.

The Kathmandu Airport transfer by the representative of the agency as per the flight schedule.

What are the food and accommodation facilities available during Mount Kailash Manasarovar Trek via Simikot?

Mount Kailash Mansarovar Trek via Simikot is a combination of teahouse and camping trekking. Teahouses en route provide you the basic facilities of food and accommodation. You may not find the luxurious services of this type while in the trekking duration.

While spending nights at the tented camp, the crewmembers prepare the food items as per the available resources. You have to carry the stuffs for food and accommodation by yourself.

You have to hire porters in the cliffy trails to transport lodging and foodstuffs. In some sections, you can also find yaks or trucks to carry such things from one place to another.

How difficult is Kailash Manasarovar Trek via Simikot?

The section between Simikot and Hilsa should be covered on foot. You have to follow the trails going past the cliffs above the Karnali River. This section is quite challenging as the trail is narrow going uphill and downhill.

The section between Hilsa and Darchen is quite comfortable. You will be driving overland in a private jeep by taking enough acclimatization. The kora section is more challenging as you have to walk above 5,000m altitude.

Crossing the Dolmo La Pass (5,639m) is the most difficult part of Mount Kailash Mansarovar Trek via Simikot. You have to begin the trek to cross this pass as early as possible.

The weather of this highest pass is always unpredictable. And it is also the windiest part of the entire trip. If you don’t cross it before the dawn, you may have to cancel the trek as well.

Rest of the route is covered in a private vehicle and local bus. Therefore, it is not much difficult to complete. In a nut shell, it is a challenging trip to the holy pilgrimage site of Tibetan Autonomous Region.

Write a Review on Kailash Tour via Simikot