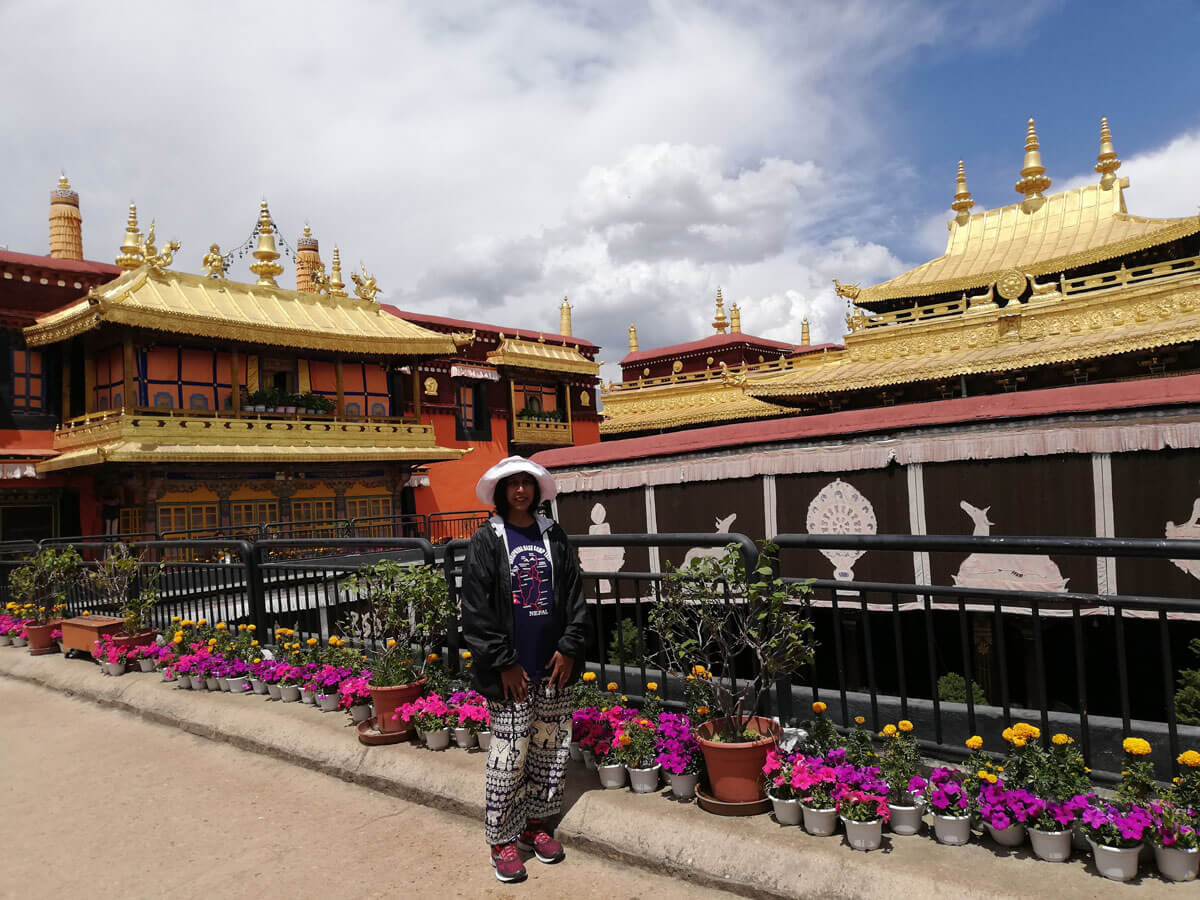 4 Nights 5 Days Lhasa Tour takes you to the world famous tourist destination of Tibetan Autonomous Province, Lhasa. ‘Lhasa’, is a Tibetan word meaning the ‘Place of God’ which is further justified by numerous Buddhist monasteries and shrines. It is a beautiful cultural and religious city situated at the elevation of 3,650m on the bank of the Kyichu River. Almost 1,300 years old history and various landmarks of this city have been the pulling factors of Tibetan tourism. Although it is short tour package to Tibet, you can get the full satisfaction of your craving for wonderful socio-cultural sites.

Lhasa sightseeing tour is an opportunity to observe ancient monasteries, temples, historical relics and Buddhist scriptures, arts and crafts. You can also visit the spiritual sites like monasteries and temples for peace of mind by forgetting the everyday earthly troubles.  While natural sites like lakes, rivers and snowy peaks inspire you to lead a tension-free life on the natural environment. More importantly, Tibet tour teaches you how you can best conserve the historical, religious, cultural and natural heritages to promote national and international tourism.

You take a flight to and from Tibet to experience this multi-faceted tour to Tibet which gives you experience of religion, culture, history and nature at the same time. You will be visiting the most important religious heritage sites of Tibetan Buddhism like Drepung Monastery, Sera Monastery and Ganden Monastery. Similarly, the Dalai Lama Palaces: Potala Palace and Norbulingka Palace are historically important sites reflecting Buddhist art and architecture at the fullest. Tibetan Medicine and Astrological Institute plus Tibetan Medicine Factory make you familiar with herbal medicines and wonder of healing in traditional methods.

To have a lifetime experience of historical, cultural and religious sites of Tibet, book Lhasa tour for 4 Nights 5 Days. You fly to Lhasa, the Capital of Tibet from Kathmandu and return Kathmandu on the fifth day after Tibet excursion. The itinerary of Tibet Lhasa tour can be extended if you want to experience other natural sites or manmade milestones. Nepal Trekking Routes has designed Lhasa Everest Base Camp tour 8 Nights and 9 Days, Lhasa Kailash Mansaroval tour, etc. To get the required information about the customized Tibet tour and trekking packages, contact us via email, WhatsApp, online booking services or phone calls.

In the morning after breakfast, you take a one-hour’s flight from Kathmandu InternationalAirport to Gonggar Airport Lhasa. You enjoy the aerial view of the great Himalayas duringthe scenic flight until you reach the Capital City of Lhasa. As soon as you reach the airport, alocal Tibetan representative receives and takes you to the hotel for th accommodation. Theinternational airport is about 62 kilometres far from the main city of Lhasa where you usedriving to reach the hotel. You take a complete rest at the hotel booked for your stay as it is acclimatization day. In the evening, the tour guide gives you full information about theoverall 4 Nights 5 Days Lhasa Tour itinerary. You get details about the major sites you willbe exploring in the days to come ahead.

This is the first day of yours in Tibetan Autonomous Province, so, you will explore the culturally important sites here. As soon as you take your breakfast, the tour guide takes you around the city ofmonasteries and Buddhist relics. However, you go on Lhasa Sightseeing
Tour to Potala Palace which is a must-visit historical site to complete the Tibet tour.Named after Mount Potalaka, the abode of bodhisattva Avalokitesvara, this palace stands between Drepung and Sera Monasteries. One of the Seven Wonders of the World, Potala Palace wasa winter palace of Dalai Lama between 1649 and 1959. The thirteen-storey buildings famous
for decorative painting, jewelled work, carving and other decoration, contain 1,000 rooms,
10,000 shrines and 200,000 statues. Potala Palace was enlisted into the UNESCO World
Heritage Sites in 1994 as a significant landmark of historical and religious replica. Now, it has been developed as a Museum calling the visitors from all over the world.
Then, you will go to visit Norbulingka Palace which is located 3 kilometres west to the Potala Palace on the bank of the Kyichu River. Once the summer palace of Dalai Lama in the past, it
is situated at an altitude of 3,650m. ‘Norbulingka’ is a Tibetan word which means ‘Treasure
Garden’ or ‘Treasure Park’ and has been the central attraction of Lhasa tour. It is the highest,largest and well-conserved ancient manmade horticultural garden in the world which houses30,000 cultural relics of ancient Tibetan history. This palace has spread in an area of 3.6 sq
km including 3.4 sq km of green meadow covered with dense forests. Built in the 18 th century, this palace is a living example of Tibetan Buddhist architecture just as other socio-cultural sites.
After you are finished with the Dalai Lama Palaces, you visit the Drebung Monastery, oncethe largest monastery in the world. Constructed behind the mountain ridge and isolated from the city area, this monastery is the hone for over 10,000 monks. Although the monastery is
about 1,300 or 1,400 years old, most part of this monastery remains untouched and unspoiled.

Today after breakfast, you will go for Lhasa Day Tour to explore the other most importantlandmarks in the city. First of all, you visit Sera Monastery which is just 5 kilometers north ofthe main city of Lhasa. One of the most beautiful artistic Buddhist shrines, it used to be the
largest monastery in the world. Constructed in the Tibetan Buddhist architectural style, SeraMonastery once used to be the home for more than 5,000 monks. It has a close connection
with the Sherpa people, the mountain conqueror residing in the Nepalese Himalayas. Some vidence shows that the people who migrated to the eastern Himalayas of Nepal due to various reasons were the worshippers of Sera Monastery. The word ‘Sherpa’ is made up of
two words: ‘Ser’ meaning the ‘worshipper of Sera Monastery’ and ‘Pa’ referring the
‘community or group’. The same people became the Sherpas in Nepal in the long run andhave the close bond with the Himalayas.
Then, the tour guide directs you towards Jokhang Monastery which is the popular Tibetan pilgrimage site visited by thousands of visitors. Decorated with prayer wheels, reclining deer
and golden sutra streamers, this shrine is located at the heart of the Old Lhasa City. You canjoin the large number of worshippers who do the Kora (the sacredcircumambulation) for thereligious purpose. It is a historical site as well because it contains the most precious religiousrelic of the entire Tibet Autonomous Region. A golden Shakyamuni Buddha idol gifted to the
Chinese Princess Wen Chen on her wedding day with the Tibetan King Songsten Gompo isinstalled here.
Finally, you take a stroll around Bharkhor Market which is the largest marketplace of theentire Lhasa City. The Tibetan people visit the market to buy their every day necessities
every now and then. So, you can enjoy the Bharkhor Market which always live with thepeople and their movements. You can purchase some typical relic or other souvenirs to utilizethe time and mix into the crowd! After visiting the hustling and bustling trade center, youreturn to the hotel and take rest for the day.

Today is the last day of excursion around Lhasa City, therefore, you will visit GandenMonastery or Ganden Namgyeling. Founded in 1419 by the philosopher and Tibetanreligious leader, Je Tsong Khapa, it is one of the three Galug University monasteries. Othertwo of these three monasteries are Sera Monastery and Drepung Monastery serving as atourist attraction of Lhasa. Ganden Monastery is located some 40 kilometres northwest ofLhasa in Dagze Country and is famous for dramatic view of the valleys surrounding it.Situated on top of Wangbur Mountain at the elevation of 4,300m, the full name of thismonastery is Ganden Namgyal Ling. ‘Ganden’ means Tushita, the heaven where thebodhisattva Maitreya dwells according to the Tibetan Buddhist belief. And ‘Namgyal Ling’refers to ‘Victorious Temple’, so, it means ‘the victorious shrine located in heaven where thealmighty Maitreya resides. You can witness more than two dozen major chapels with largeBuddha statues which represent the reverence to Lord Buddha. The monastery contains threemajor sights: the Sedrung the Tsokchen Assembly Hall and the Ngam Cho Kang. TheSedrung contains the tomb of Tsong Khapa while the Ngam Cho Kang is where Tsong Khapaused to teach his disciples. This monastery is a perfect epitome of the artefacts belonging toTsong Khapa which has attracted thousands of tourists every year.Men-Tsee-Khang (also Tibetan Traditional Hospital or Tibetan Medical and AstrologicalInstitute) is a must-visit site of Lhasa. This medical institute was first built in 1916 tocontinue the 2,300 years old long medical history of Tibet. Spread on nearly 10 acres of land,it is the biggest Tibetan traditional hospital that employs a staff of 450 members. The doctorsof this institute use the traditional methods of treatment which comprise of pulse checking,talking therapy and recipe of herbal medicines. You can visit different sections for brainblood vessels, orthopaedics, paediatrics, internal medicine and surgery in the hospital.Similarly, you can observe Tibetan Medicine Factory whihwas established in 1964 and hasbecome the largest pharmaceutical company in the region. Equipped with modernmanufacturing technology, it has been producing over 350 different kinds of medicines thatare consumed in and out of the country. The herbal medicines produced by this medicinefactory are very effective in healing hypertenion, heart disease, paralysis, gastric, ulcers, etc.

This is the end of the Lhasa tour 4 Nights and 5 Days’ package which you enjoyed at thefullest so far as we believe. After having breakfast, the tour guide or the local representativedirects you to the Lhasa Gonggar Airport as your flight schedule. It is about an hour’s drivefrom the hotel at an average speed of 50.60 km/hour. During Lhasa Kathmandu return flight,you can again enjoy the in-flight view of the great Himalayas Nepal and Tibet. After arrivingat the Kathmandu International Airport, the representative of Nepal Trekking Routes receivesand transfers to the hotel. The further plan will be made as per the deal made earlier or in themutual understanding between you and the agency.

Write a Review on Lhasa Tour