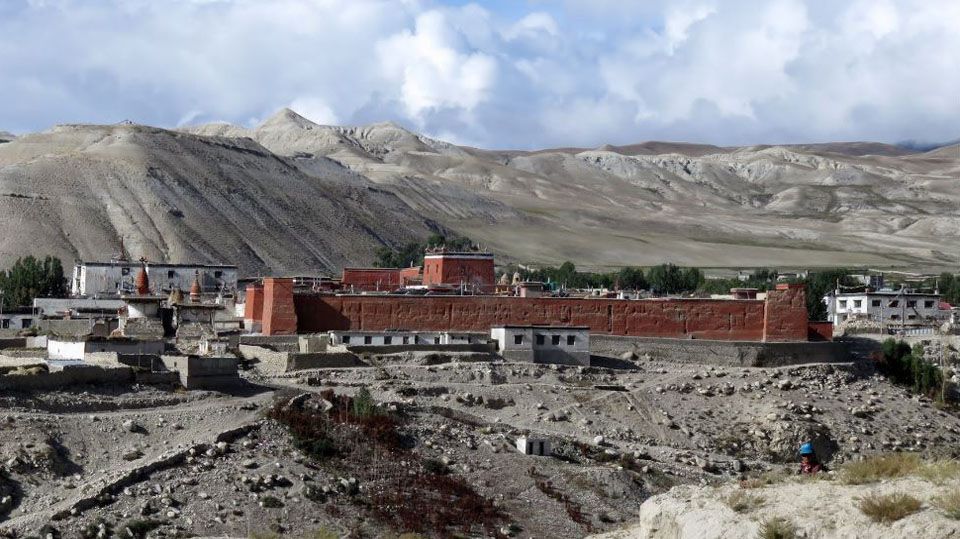 Upper Mustang Trek is one among the restricted area trekking in Nepal. It lies in the famous Mustang district that is known as “the districts across the Himalayas.” It is called so because of proximity with the Tibetan Plateau. Although it lies in Nepalese territory, it is culturally and geographically influenced by Tibet.

Mustang trek is famous for its desert-like climate and harsh rock-faced landscapes. It can even be visited in summer monsoon. Because it is rain shadow area of Annapurna (8,091 m) and Dhaulagiri (8,167 m) Massifs. When the remaining parts of Nepal experience heavy rainfall and flood, you can explore Upper Mustang.

Upper Mustang Trek is a fairly easy excursion to the ‘Last Forbidden Kingdom’ of Lo Manthang. It shares its border with Tibetan plateau and has an average altitude above 3,000 m.  The ancient monasteries and festivals found here are testimonials of Tibetan Buddhist culture and tradition.

The Last Shangri-La of the Northern Himalayas, it is populated mainly by a minority group of Tibetan origin. It was previously a restricted area until 1990 in order to protect the uniqueness of biodiversity, culture and tradition. Therefore, the foreigners still need a special permit to embark through incredible landscapes, prehistoric caves and age-old monasteries. A large part in Upper Mustang region is like desert even though there are snow capped mountains at its northern edge. That is why, it is known as the ‘mountain desert’ of Nepal located across the Himalayas.

Do you want to have experience different geographical and socio-cultural diversity from the rest of the other regions of Nepal? If ‘yes’, Upper Mustang trek can quench your thirst to gain lifelong knowledge about such harsh realities! Moreover, there are a lot of things this trek has to offer you like the bonus stopovers at Jomsom and Muktinath.

Upper Mustang trek is famous for its natural and cultural attractions. You can have a breathtaking view of  snowy peaks of Annapurna and Dhaulagiri ranges. Moreover, Mt. Machhapuchhre (6,693 m), Nilgiri and Tukuche peaks are other beauties of this trek.

Tibetan Buddhist culture, tradition and lifestyle has influenced the people of Lo Manthang. The 12th or 13th centuries monasteries in almost every village reflect the Buddhist culture and tradition in this region.

The arid landscapes having parched barren hills, Tibetan Plateaus and housing styles are other attractions. The Sky Caves made around 2,000-3,000 years ago to mummify the dead bodies are also something worth visiting. If you do Upper Mustang trek in May, you can observe Tiji Festival. It is the most colorful festival, which is celebrated for three days.

The walled city of Lo Manthang is the prime historical site preserving the ancient art and artefacts. The Last Forbidden Kingdom, Lo Manthang used to be Capital City of  hidden kingdom of the Himalayas. The four-story palace of the Mustangese King surrounded by other artistic buildings and shrines are also beautiful.

Additionally, Tinker, the summer palace of the then King is another famous site. You can try riding on the horseback to visit this ancient village. It is the last human settlement area of Upper Mustang. From here, you can have the wonderful Lo Manthang Valley and the amazing bizarre landscapes.

The ethnic villages having different housing style like that of the Igloos are also interesting. The houses have the mud roof to protect the people from the freezing temperature and snowfalls. They are decorated with the prayer flags, mane walls, chortens and prayer wheels. As a whole, Upper Mustang trek is a trip towards the abode for natural beauty and cultural diversity getting popularity day by day.

The Buddhist Shrines of Mustang Trek

While doing Upper Mustang trek, you can visit at least a Tibetan Buddhist monastery in every village. Some of them are as old as 1,200 years preserving their uniqueness and religious significance still today. Champu Lakhang (God House), the red Thumchen Gompa and Chyodi Gompa are the most visit worthy sites. All these monasteries are located in the walled city of Lo Manthang.

Other notable Buddhist shrines of the hidden kingdom of the Himalayas are Ghar Gompa and Namgyal Gompa. Ghar Gompa is 1,200 years old monastery located in Gyankar Village. Here, you can see the thanks and other Buddhist paintings preserved as the historical manuscripts. A few kilometers away from the ancient Capital City of Mustang lies Namgyal Gompa. It is situated on a foothill, so, you can see the alluring vista of Lo Manthang Valley including Annapurna and Dhaulagiri Himalayan Ranges.

Upper Mustang trek rewards you with the centuries old man made and natural caves found in large number. The most notable are the Sky Caves, which is a group of around 10,000 caves made by human beings. The manuscripts and other documents preserved in the cave premises justify that they were built around 2,000 to 3,000 years ago

Located on the bank of the Kali Gandaki River, the Sky Caves are believed to be built by the then Mustangese people to mummify the dead bodies. If further exploration is made, we can find a  new twist in the history of humankind. The next is the Rangchung Cave, which is a network of natural caves on the way to Chhusang from Syanmachen.

Tiji Festival is the greatest and most colorful festival celebrated in Upper Mustang. It is celebrated to mark the victory of virtue over vice. The exact date of the celebration of this festival is fixed according to the Chinese calendar. Generally, if falls in the third week of May. Therefore, to become a part of this fabulous Buddhist celebration, you should plan your Upper Mustang trek in the respective time.

The Mustangese people celebrate this festival to commemorate the legendary figure, Dorje Jono. He is one of the many incarnations of Lord Buddha who came to Earth to protect it from calamities. The myth states that Dorje Jono got victory over the demonic activities planned to destroy the kingdom through natural catastrophes.

Tiji Festival is celebrated at the premises of Choede Monastery. It is one of the most important Buddhist shrines of the ancient capital of Lo Manthang. It is also known as The Chasing of the Demons Festival. The history shows that Tiji Festival has continuously been celebrated since 500 years back. It further helps to mark the peaceful co-existence of people of Upper Mustang and the prayer for the World Peace.

You have to take a half an hour local flight from Kathmandu, the capital city of Nepal to reach to Pokhara. This is a short flight and presents you with scenic beauties. Alternatively, you may opt for a 6hours drive to Pokhara and stay overnight in Pokhara.

You will drive to the airport of Pokhara for catching another short flight of 15 minutes to reach at Jomsom i.e. headquarter of the district Mustang and a region of Thakali people. At this point, you will start your trek across Kali Gandaki valley for reaching to Kagbeni.

Today, our team will take you for a walk across the riverbed of Kali Gandaki to come across Chhusand and Tangbe veillages. The entire area consists of barren landscapes to remind you of the Tibetan plateau. Later on, you have to cross a suspension bridge for reaching the Chele village and stay overnight there.

We will cross two passes named Dorje La Pass at 3735meters and Taklam La Pass at 3624meters via Ghiling Vhena to reach at Syangboche from Chele.

We continue with our trek across barren and rugged landscapes to cross Yamda La and Nyi La mountain passes at 3850meters and 4010meters respectively to get spectacular views of Mount Dhaulagiri and Mount Annapurna, while stay overnight in Gheling.

Today, you will get stunning views of landscapes, cliffs and nearby villages to reach at Ghami

We will cross Charang La Pass at 3870meters to reach at Charang Village and have an overnight stay there. Specialty of Charang village is that it has mani walls and almost similar type of culture followed by Tibet people.

Finally, today will reach at Lo-Manthang, known as the forbidden kingdom consists of many white washed walls and renowed palaces. Here, you will view old monasteries and get glimpse of Tibetan Buddhism.

You require taking rest and have relaxed in the Lo Manthang region to acclimatize yourself with the high altitude and weather. You may make a visit across the entire walled city and view a large number of beautiful monasteries.

Our team will take back to Ghami by following the same route that you followed before.

Our downhill trek will continue to reach to Chele and stay overnight there.

On the last day of your trek, you will go back to Jomdom across the Kali Gandaki River Bank. You may explore the entire area in Jomsom and enjoy views of Dhaulagiri and Annapurna mountain peaks.

We will drive back to Jomsom and take a local flight to reach Pokhara and stay overnight in Pokhara.

You may go for a half an hour return flight to Kathmandu by starting from the airport of Pokhara or choose a private jeep or car to reach there.

What permits do I need to do Upper Mustang trek?

To do Upper Mustang Trek, you must have the following permits

What is the cost of the Upper Mustang trek permits?

The cost of Upper Mustang Trek permit is USD 500 for first 10 days and then USD 50 per extra day. This permit is issued by Immigration Office, Kathmandu. TIMS card needs USD 10 and it is managed by the trekking agency. And Annapurna Conservation Area Project Permit costs USD 27 and you get it from the office of ACAP.

Can I do Upper Mustang trek alone?

No, you can’t. Upper Mustang trek is a restricted area trekking in Nepal, so one can’t do this trek alone. For this trek, there must be two members in a group accompanied by a registered trekking guide and a porter. The trekking guide takes you along the right trail and helps in case of any emergency.

Can I get altitude sickness during this trek?

When you are travelling through the landscapes above 2,500m, there is always chance for altitude sickness. Lo Manthang (3,840m), the Capital of the ancient Himalayan Kingdom is the highest place to spend the night. Although there are three high passes above 3,800m, you spend the limited time over there. However, you can avoid the altitude sickness or AMS (Acute Mountain Sickness) if you follow some precautions. You must walk slowly by taking enough rest. You should have enough drinking water and hygienic food including sound sleep. For safety measure, you should pack some medicines like Acetazolamide and Diamox Oral in your backpack. As soon as you feel any symptom of such problem, you should share it with the guide. He can help you get rid of this as he is habituated to walking in the high altitude palce.